That’s J.,
Our next-door neighbor,
An Icelandic gal born in California.
It’s been a pleasure watching her grow up.
My wife Terrell and I refer to her as our other daughter.
We’re the beneficiaries of that compliment, for sure.
Anyhow, how lucky am I that J. will often model at a moment’s notice.
In the image above, I was practicing with a new off-camera flash.
We were in a garage with too much ambient light.
So I dropped my ISO to 100 and stopped down to f/22 at 1/200 of a second to produce a perfectly black background.
Then I experimented with flash power to study different effects.
This image is a throw-away, an outtake, nothing more.
But there’s one thing I like about the photo a lot—
The sharp profile line that travels down Jesigga’s forehead,
Across her nose and lips and round her chin.
That line is very interesting,
An ultra-stark edge,
An abrupt demarcation between light and dark,
Between something and nothing.
I’m fascinated by that Line, always.
But there’s something else that interests me.
My outtake came to the attention of a young Bay Area artist.
His name is August Vu.
He tinkers with many mediums,
Including clay, crayons, oils, and even recyclables.
In sleepless hours, he makes art to clear his mind and think.
You won’t find him on social media.
He avoids it.
His interests are elsewhere.
But I’m delighted to share his interpretation of my photo here. 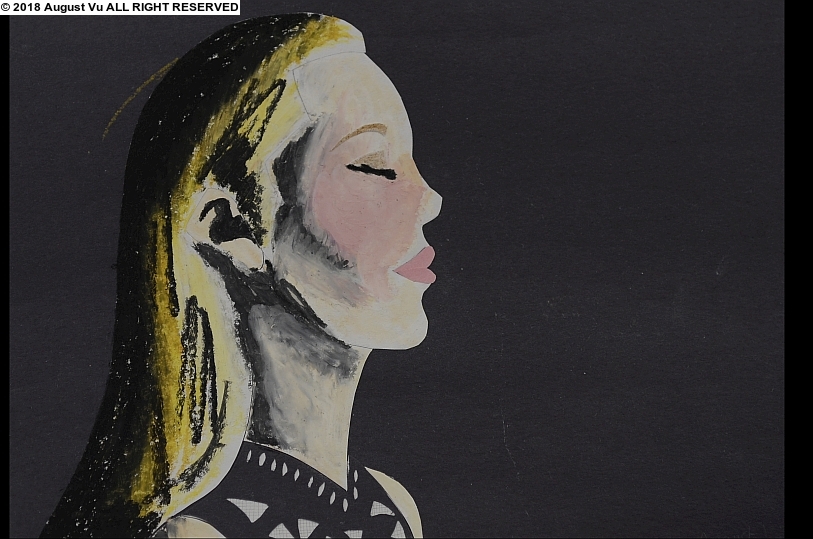 His rendering makes up for all the faults of the original picture.
He surfaces textures and details that were originally lost in shadows—
In her cheek, in her jaw, and especially in her hair.
Isn’t that what an artist is supposed to do,
To make invisible things, visible?
Well, I think so.
And our young Bay Area artist does just that,
All while preserving The Line.
Well done, sir!
A tip of the hat to you.

If you’re interested, check out this month’s special offer.

← Stand Out
Snow White and the Baby Bump →

2 Comments on “See the Invisible”